A short ,sweet look at Egoic Reactions by Brandilyn Tebo

"When you learn to be the witness of your thoughts and emotions, which is an essential
part of being present, you may be surprised when you first become aware of the background
“static” of ordinary unconsciousness and realize how rarely, if ever, you are truly at ease
within yourself. On the level of your thinking, you will find a great deal of resistance in the
form of judgment, discontent, and mental projection away from the Now. On the emotional
level, there will be an undercurrent of unease, tension, boredom, or nervousness. Both are
aspects of the mind in its habitual resistance mode".

From ‘The Power of Now’, Eckhart Tolle

..if one recalls being jealous in their past,,then really think about what your mind was doing?,,for example: a young Artist is likely to get jealous if their Art is not favored as another Artist in a contest..the reason is the young Artist hasn't yet acquired a high degree of "self worth yet"...thus is having a egoic reaction,,(the ego is attempting to rationalize the self's-own self worth,yet by being defensive,which is a neg thought!....:"This is why the child's self worth must be nutured starting at birth"

I was taking a nap and bit ago ,I awoke to Leo's voice from Actualized.org,(I often play one of his mp3 audios on ,then fall asleep.lol), today I happened to be playing "how to deal with criticism-trolls-haters".

As I often say to others "download the mp3's for each of Leo's video's,listen to them instead of" T.V", or just while surfing the "Web",often we have to be in the "right state of mind", to hear something,then "grasp it",and it's importance. Today,I heard something,that reflects something about "ego" .some aspect that it very much subconscious,yet very deceiving!,something to very aware of. Also shortly after the part,which enlightened me,he talks about.."doing something Constructively vs. Destructively".

I think this picture ,we all can relate to at times

I personally related to "Jacques Derrida's, "Idea of looking at something,then seeing the "Opposite,or opposing aspect of it",or for example: instead of judging something by " what I don't like about it, is there something constructive or can I gain (growth), by some aspect of it. Many say Derrida's ideas are hard,difficult to understand,yet if I look at is "Works",and keep this in mind,it is most helpful, another point I always keep in mind,when studying Leo's,Plato's,Derrida's and Works of anyone,,I might not completely agree with them,yet is there something "I can Gain from them ".

We must always remember, "Our Ego's are always in there some where,,judging,trying to steer us always from new,unfamilar idea's"

Liberation from the Self 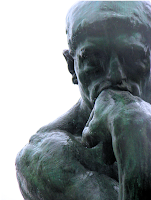 The average person, though he or she likely does not know or believe it, is driven by the small "self" of the human ego. The sense of a separate "I" which is nothing more than an undisciplined but continuous stream of thought is, in effect, his or her identity, and he or she acts based upon such thoughts. Yet on all continents and in all ages non-dualistic wisdom traditions have pointed out the fallacy of this belief. We are much, much more than we think; albeit, what we think, we are.
"What man," asked Jesus, "ever added one cubit to his stature by taking thought?" "Know thyself," Socrates urged. "Nothing is either good or bad, but our thinking makes it so," observed Shakespeare.
"There is no ego apart from the thoughts," explains Eckhart Tolle in the attached video. "The thoughts, (and) the identification with thoughts, is ego. But the thoughts that go through your mind, of course, are linked to the collective mind of the culture you live in (and) humanity as a whole. So they are not your thoughts as such, but you pick them up from the collective - most of them. And, so, you identify with thinking, and the identification with thinking becomes ego. Which means, simply, that you believe in every thought that arises, and you derive your sense of who you are from what your mind is telling you who you are."
Yet the wisdom of all the worlds great religious and/or spiritual traditions (along with that of transpersonal and many other Western psychoanalytic schools) tells us that there is a far greater depth to our being than the merely egoic self.
The great twentieth century Protestant theologian, Paul Tillich put it this way:
"The wisdom of all ages and of all continents speaks about the road to our depth. It has been described in innumerably different ways. But all those who have been concerned - mystics and priests, poets and philosophers, simple people and educated - with that road through confession, lonely self-scrutiny, internal or external catastrophes, prayer, contemplation, have witnessed to the same experience. They have found they are not what what they believed themselves to be, even after a deeper level had appeared to them below the vanishing surface. That deeper level itself became surface, when a still deeper level was discovered, this happening again and again, as long as their lives, as long as they kept on the road to their depth. . . .

The name of this infinite and inexhaustible depth and ground of all being is God. That depth is what the word God means. . . . For if you know that God means depth, you know much about him. You cannot then call yourself an atheist or an unbeliever. For you cannot think or say: Life has no depth! Life itself is shallow. If you could say this in complete seriousness, you would be an atheist; but otherwise you are not. He who knows about depth knows about God."
To mistake the small "self" or ego with who we are, thereby obscuring the depths of our being (and thereby the Ground of Being, itself) is, however all too common. Albert Einstein, called it "an optical delusion of consciousness," observing: "A human being is part of the whole called by us the universe, a part limited in time and space. We experience ourselves, our thoughts and feelings as something separate from the rest. A kind of optical delusion of consciousness."

"The true value of a human being," the great scientist noted, "is determined by the measure and the sense in which they have obtained liberation from the self. We shall require a substantially new manner of thinking if humanity is to survive," he warned.
The first step in obtaining "liberation from the self," is thus, (as Tolle notes) becoming aware of our own egoic thinking in order to disidentify with it, to become the observer of the thought rather than the enactor of the ego's thinking.

I thought Dr. Mate gave a great talk, in regards to ego, and how it prevents us from finding true self