Creating our Own worlds,gods,beliefs etc.

Anthropomorphism is the attribution of human traits, emotions, or intentions to non-human entities.[1] It is considered to be an innate tendency of human psychology.[2]

Personification is the related attribution of human form and characteristics to abstract concepts such as nations, emotions and natural forces like seasons and the weather.

Both have ancient roots as storytelling and artistic devices, and most cultures have traditional fables with anthropomorphized animals as characters. People have also routinely attributed human emotions and behavioural traits to wild as well as domestic animals.[3]

The phrase pathetic fallacy is a literary term for the attributing of human emotion and conduct to all aspects within nature. It is a kind of personification that is found in poetic writing when, for example, clouds seem sullen, when leaves dance, or when rocks seem indifferent.

History of the phrase-pathetic fallacy 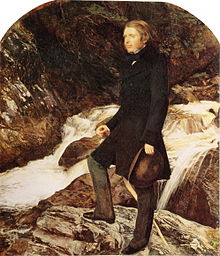 Ruskin coined the term "pathetic fallacy" to attack the sentimentality that was common to the poetry of the late 18th century, and which was rampant among poets including Burns, Blake, Wordsworth, Shelley, and Keats. Wordsworth supported this use of personification based on emotion by claiming that "objects ... derive their influence not from properties inherent in them ... but from such as are bestowed upon them by the minds of those who are conversant with or affected by these objects."[5] However Tennyson, in his own poetry, began to refine and diminish such expressions, and introduced an emphasis on what might be called a more scientific comparison of objects in terms of sense perception. The old order was beginning to be replaced by the new just as Ruskin addressed the matter, and the use of the pathetic fallacy markedly began to disappear. As a critic, Ruskin proved influential and is credited with having helped to refine poetic expression.[6]

The meaning of the term has changed significantly from the idea Ruskin had in mind.[7] Ruskin's original definition is "emotional falseness", or the falseness that occurs to one's perceptions when influenced by violent or heightened emotion. For example, when a person is unhinged by grief, the clouds might seem darker than they are, or perhaps mournful or perhaps even uncaring.[8][9]

There have been other changes to Ruskin's phrase since he coined it: The particular definition that Ruskin used for the word "fallacy" has since become obsolete. The word "fallacy" nowadays is defined as an example of a flawed logic, but for Ruskin and writers of the 19th century and earlier, "fallacy" could be used to mean simply a "falseness".[10] In the same way, the word "pathetic" simply meant for Ruskin "emotional" or "pertaining to emotion".[11]

Setting aside Ruskin's original intentions, and despite this linguistic 'rocky road', the two-word phrase has survived, though with a significantly altered meaning.[6]

Pareidolia (/pærɪˈdoʊliə/ parr-i-DOH-lee-ə) is a psychological phenomenon in which the mind responds to a stimulus, usually an image or a sound, by perceiving a familiar pattern where none exists.

Common examples are perceived images of animals, faces, or objects in cloud formations, the Man in the Moon, the Moon rabbit, hidden messages within recorded music played in reverse or at higher- or lower-than-normal speeds, and hearing indistinct voices in random noise such as that produced by air conditioners or fans.[

I have studied the Bible fairly in depth, and felt/ feel similar to what Jeff Daugherty speaks of here.