"Some thing we as humans allow to happen over and over"

Putting " eggs in one basket "

A monopoly (from Greek μόνος, mónos, 'single, alone' and πωλεῖν, pōleîn, 'to sell') exists when a specific person or enterprise is the only supplier of a particular commodity.

my own dilemma of sorts, in that it is Amazing that for example ; Leo at Actualized.org, or Trump White House

Joe Rogan having many videos on Vimeo, and downloadable,

For example if you go to Vimeo, search " berdache ",  you will find videos of myself

Education as a Monopoly

eople need to use more of their intelligence a lot better if we are to avoid a civilization crash -- a crash starting with the consequences of overpopulation -- pollution, wars, crime, economic fluctuations and crashes, overfishing of the oceans, deforestation, and others, and continuing with climate shifts and a likely crisis of agriculture (declining food quality and quantity).

Human civilization, as a whole, needs to rehabilitate the truth-sense -- and that means both recognizing the ring of truth and recognizing (and allowing) the sense of mystery that signals us when we really don't know what's what. We need both -- equally -- for reasons I explain, here.

People are bogged down in everything we think we know and one symptom is that our ability to pay attention has been reduced.  People are chronically disturbed by what's inside and distracted by what's outside, and that's called "ADD" and "ADHD".

The problems facing civilization have been compounded by people's inability (and unwillingness) to take in new information, and that has to do with more than just the "information glut"; it has to do with a slowed-down "attention refreshment rate" -- the ability to clear the mind.  It's both.  I'll explain that, too.

This piece is about what keeps human civilization bogged down and what it will take, most basically, to stop and to reverse a "civilization nosedive" (and planetary calamity).  I'm not being presumptuous.  I'm being starkly truthful.

Three Advantages Tempt Toward Three Pitfalls
Three evolutionary developments have led to the success of humanity as a species. In their extreme states of development, they've gone in an unbalanced direction and have now made humanity a hazard to ourselves as a species and a danger to the rest of the earth's living life-support system.

Those three evolutionary developments are memory, language, and products of "the hand" (technology and art).

They worked for a time in human history.  Now, they are out of balance in ways that I will recognizably describe.

Humanity faces a crisis of integrity.

Integrity
The way I mean, INTEGRITY, is not the usual sense confused with "honesty".  I mean it in the purest sense of the term: the sense of "something recognizable being there -- something that holds together and can withstand participating in experience".

Integrity is just a matter of things working together to do what they can't do, by themselves.

As an example, an airplane consists of parts put together. Without the "together" part, we don't have an airplane; what we have is a pile of parts.

Memory
What follows isn't just for you to memorize or intellectually to understand. This isn't a high school or college course where you get a grade for remembering something you've been told.  It's for you to "locate" in yourself, as a set of experiences that everybody has.

The way most people regard memory is:

You may not have thought about it, but if you consider it, you'll see it's so, in your case.
That formulation leaves the impression of three ingredients of memory, doesn't it?  But, when we remember things, we remember whole things, not "ingredients".

I'd like to present a different way of looking at memory (again, four factors):

You can't imagine the cake that's going to come out of a new recipe, in advance.  You may know the new ingredients, but the cake that will come from them is unknown.

Knowledge Has Gotten Too Big for Its Britches.
Things change.  Everything that we remember is "the way that it was." We have no certainty, no assurance, that the way anything was is the way that it is or will continue to be.

To assert that the way something was is the way it is, is to misrepresent our degree knowledge. It may or may not be so.

But people everywhere represent that they know more than they actually do.  There's a reason, for that, that I will get into.

This cultural habit of clinging to the appearance of being, "a knower", has led to humanity being bound up in ways of perceiving, thinking and acting that have led to chronic conflict and failure to change with the necessities of the times.

It interferes even with efforts to seek knowledge to overcome problems.  Even in the face of new knowledge, people go for the familiar.  That's how advertising works: by making what is new seem familiar.  People go for "the familiar".

Not surprising -- but there's a deeper problem:
Education Perpetuated Civilization -- and is Now Bringing it Down.
Education is the foundation of civilization and its continuance from generation to generation. Education, the way it's been done, is relies heavily upon memory.

While that seems inevitable and necessary and to have worked for most of human history, the way it's been done is not sufficient, anymore.

Memory-dominant education has a gigantic pitfall that didn't become obvious until the knowledge-base of humanity became too great for any one individual to contain, until the world population grew so large that different cultures had to interact with each other, and until human technology because a dominant force accelerating cultural change faster than people could keep up.

People are drowning in memories -- and don't even know or recognize it.

The Pitfall
All new developments of culture come in through "the imagination channel" -- art ("the beautiful"), morality ("the good"), and technology ("the true") -- and there's the rub: two things can't occupy the same space at the same time.  When memory dominates, imagination recedes. Knowledge and tradition that at first kept things aloft are now ballast.
People Seem Reasonably Intelligent ...
Memory gives the illusion of intelligence.  Observe people's behavior in public places, such as restaurants and entertainment venues.  Generally, people seem reasonable, normal, and for the most part, reasonably intelligent.  That's because they "know the rules" of their situation -- and know how to play by them -- or break them.

Even rough-hewn individuals may seem reasonably intelligent -- some of the time. That's a sign that people have become used to a low standard of intelligence and of decorum (behavior).
When Things Change, However . . .
What does someone who operates from memory do when "something happens"? They consult memory for what to do.  Conventional thinking.

Put people into an unfamiliar, or more open-ended, circumstance (such as a political campaign, a political rally, a political office -- or a job promotion or relocation). They lose their bearings and you notice how unintelligent they (you) feel.

Now, I'm going to use a "charged" term, and so I need to tell you what I mean, by it. The term is, "idiocy".  As I define it, "idiocy" is, "an automatic, habitual, detrimental action not appropriate to the situation". It's not just an insult; it's a technical term.
Idiocy shows up in

What people should do is cultivate all four factors, in themselves so that, while accumulated memory helps them recognize something about a situation, continued attention stimulates imagination that arouses an intention better fitting to that situation -- than to the situation remembered.

It's fine-tuning that is possible when all four factors of intelligence are accessible and well-integrated, for the individual, when the individual's intelligence isn't being confined to memory.  Otherwise, we have a dunderheaded individual who is like steering out of alignment or like a stick through the spokes of a wheel. 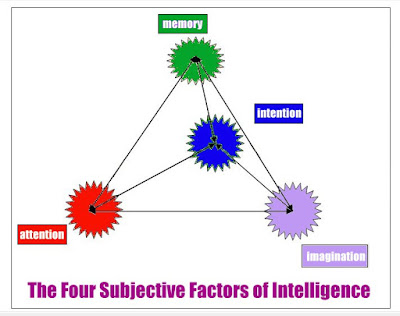 Scientific Knowledge is Real Knowledge?
Scientific knowledge is only approximate.  That's why science requires multiple measurements of anything and why "rounding" is used.  That's why engineering speaks in terms of "tolerances"; ask the engineers who designed the Space Shuttle.  Any measurement (the mainstay of science) is approximate; ask any astronomer. Error is "built in" to measurement; that's why the term, "margin of error" is used.

So engineers and scientists get used to accepting "relative certainty" as "practically absolute certainty, where a margin of tolerance or error is involved. It's an artificial certainty used as a "go" signal. It becomes an aggressive conventional attitude, that something approximately known is certainly known.
- Lawrence Gold

(The question raised in above article)