Nature ,is the Highest Muse in my eyes, yet that which is "desired to observe ",and induces desire to be in part- "Part of ". "To Know"...my idea of muse

As far as the Artist Model, their role is first foremost to begin the group together(in Life drawing Class setting) and inspire.

“It is a creation of your own mind, not the model. The model is dependent on your idea of her. Your canvas should be a thing created under the influence of her.”

― Robert Henri, The Art Spirit
“Art is simply a result of expression during right feeling. It's a result of a grip on the fundamentals of nature, the spirit of life, the constructive force, the secret of growth, a real understanding of the relative importance of things, order, balance. Any material will do. After all, the object is not to make art, but to be in the wonderful state which makes art inevitable.” ― Robert Henri

Different ways of looking at "The Muse"

One thing I have Observered, Is Female Artists are Equal to Males in Skills as Artists-" In the Life Drawing Class "

Yet Until the turn of the Century, Females where not Allowed: "Historical accounts reveal that nude models for aspiring female artists were largely unavailable. Women were barred from certain institutions because it was considered improper and possibly even dangerous for them to study from nude models.[8] Though men were given access to both male and female nudes, women were confined to learning anatomy from casts and models. It was not until 1893 that female students were allowed access to life drawing at the Royal Academy in London,[9] and even then the model was required to be partially draped.[10] -wikipedia Drawing should be regarded as a major art form, artist David Hockney once said...
Despite long being seen as "almost irrelevant", drawing is a vital part of every creative process, Hockney said.
"Drawing has been neglected for the last 30 years in art education," he told BBC News Online.

Drawing as always been the essence of most art forms. Since the beginnings of mankind it has always been the closest form to nature. It is another form of language to express nature, creativity, (creativity which comes from nature and what we see) and mankind. Probably the earliest forms of drawing date back to the prehistoric cave paintings at Lascaux.

, for example, " Imagine you play a musicial instrument,and you ,play in a band, yet only for a few months of the year and never in the summer months, do you get to practice with the band,the group,the Class-"How Good,will the group be? ",
Well people, That is pretty much the way our art's education is,The way I know "Life Drawing" is in America-me

I started this group,so people could be able to just Draw,on a regular basis,yet ,what is needed is a more formal place to have it,instead of my home,a place though where very little cost is incurred. 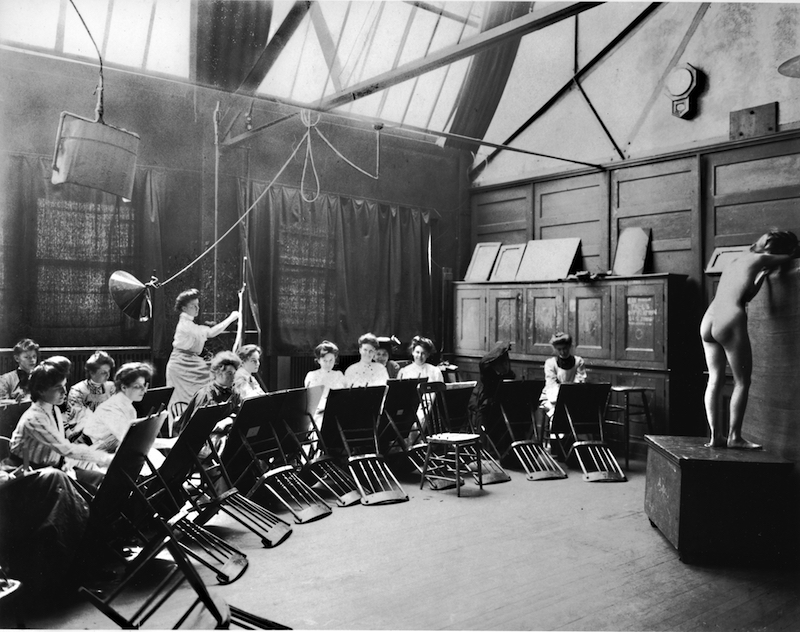 I like how they have their's flipped to support drawing boards

As you view this photo,realize,you may never see people in Higher states of "Consciousness"- I loved observing them ,listening to then breath,hearing their charcoals,pencils moving on the paper.

1-(in Greek and Roman mythology) each of nine goddesses, the daughters of Zeus and Mnemosyne, who preside over the arts and sciences.

2-A person or personified force who is the source of inspiration for a creative artist.

This is a Area Women have historically been oppressed, which in essense has harmed men in the end, as so few males where given chance to be Muses for women, as women(models) have been for men, another "morality",ego issue.(male ego)

The poets, beginning with Homer, far from improving and educating humanity, do not possess the knowledge of craftsmen and are mere imitators who copy again and again images of virtue and rhapsodise about them, but never reach the truth in the way the superior philosophers do.

For myself as a model, the only real difference from the individuals in the two videos above would be, I simply for myself ,do strongly desired to not have a penis , thus a vagina, and desire to have boobies, I am very feminine in many ways, yet not to the degree or in the way  as the individuals portrayed in videos above.