The Story of the Conquistadors

'Everything that has happened since the marvellous discovery of the Americas has been so extraordinary that the whole story remains quite incredible to anyone who has not experienced it at first hand. Indeed it seems to overshadow all the deeds of famous people of the past, no matter how heroic, and to silence all talk of other wonders of the world.' - Bartolome de las Casas

It is amazing to think that when Bartolome de las Casas wrote those words in 1542, barely 20 years had passed since the discovery and conquest of the Aztec world in Mexico. It was only three years since the defeat of the Great Revolt of the Incas in the High Andes of Peru. At that moment, in fact, Manco Inca still controlled an independent Inca state in the jungles of Vilcabamba. During the same years in which Cortes overthrew the Aztecs, Magellan circumnavigated the globe.

For the first time, people discovered the true scale and shape of the earth. We are blasé about the pace of change in our own day, but has history, and our ways of seeing the world, ever moved so fast as it did in the 16th century? The conquest of much of the New World by Spanish conquistadors during those few years was surely one of history's turning points. Indeed, as Karl Marx and Adam Smith claimed, perhaps it was the greatest event in history. There were many who thought so at the time.

'When I set out to write for the people of today and of the future, about the conquest and discovery that our Spaniards made here in Peru, I could not but reflect that I was dealing with the greatest matters one could possibly write about in all of creation as far as secular history goes. Where have men ever seen the things they have seen here? And to think that God should have permitted something so great to remain hidden from the world for so long in history, unknown to men, and then let it be found, discovered and won all in our own time!' - Chronicle of Peru

Conquistadors (/kɒnˈkɪstədɔːrz/; from Spanish or Portuguese conquistadores "conquerors"; Spanish: [koŋkistaˈðoɾes], Portuguese: [kũkiʃtɐˈdoɾis, kõkiʃtɐˈðoɾɨʃ]) is a term used to refer to the soldiers and explorers of the Spanish Empire or the Portuguese Empire in a general sense.[1][2] During the Age of Discovery, conquistadors sailed beyond Europe to the Americas, Oceania, Africa, and Asia, conquering territory and opening trade routes. They colonized much of the world for Spain and Portugal in the 16th, 17th, and 18th centuries.

The Spanish conquistadores, who were primarily poor nobles from the impoverished west and south of Spain, began building up an American empire in the Caribbean, using islands such as Cuba, Puerto Rico, and Hispaniola as bases. Florida fell to Juan Ponce de León after 1513. From 1519 to 1521, Hernán Cortés waged a brutal campaign against the Aztec Empire, ruled by Moctezuma II. From the territories of the Aztec Empire conquistadors expanded Spanish rule to northern Central America and parts of what is now southern and western United States. Other conquistadors took over the Inca Empire after crossing the isthmus of Panama and sailing the Pacific to northern Peru. As Francisco Pizarro subdued the empire in a manner similar to Cortés other conquistadores used Peru as base for conquering much of Ecuador and Chile. In Colombia, Bolivia, and Argentina conquistadors from Peru linked up with other conquistadors arriving more directly from the Caribbean and Río de la Plata-Paraguay respectively. Conquistadors founded numerous cities many of them on locations with pre-existing pre-colonial settlements including the capitals of most Latin American countries.

Disease in the Americas 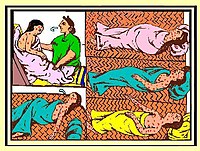 While technological superiority and cultural factors played an important role in the victories of the conquistadors in the Americas, their conquest was greatly facilitated by old world diseases: smallpox, chicken pox, diphtheria, typhus, influenza, measles, malaria and yellow fever. The diseases were carried to distant tribes and villages. This typical path of disease transmission moved much faster than the conquistadors, so that as they advanced, resistance weakened.[citation needed] Epidemic disease is commonly cited as the primary reason for the population collapse. The American natives lacked immunity to these infections.[

I can't image the "Fear,the unknown,the  American natives, endured from these New conquistadors
and can see how they could had to submit to anothers Religion, just to survive.

note-How did the Zuni tribe/spiritual beliefs survive such a time?

one of the Few to do so; that the -conquistadors- attempted to conquer
Mobile Site